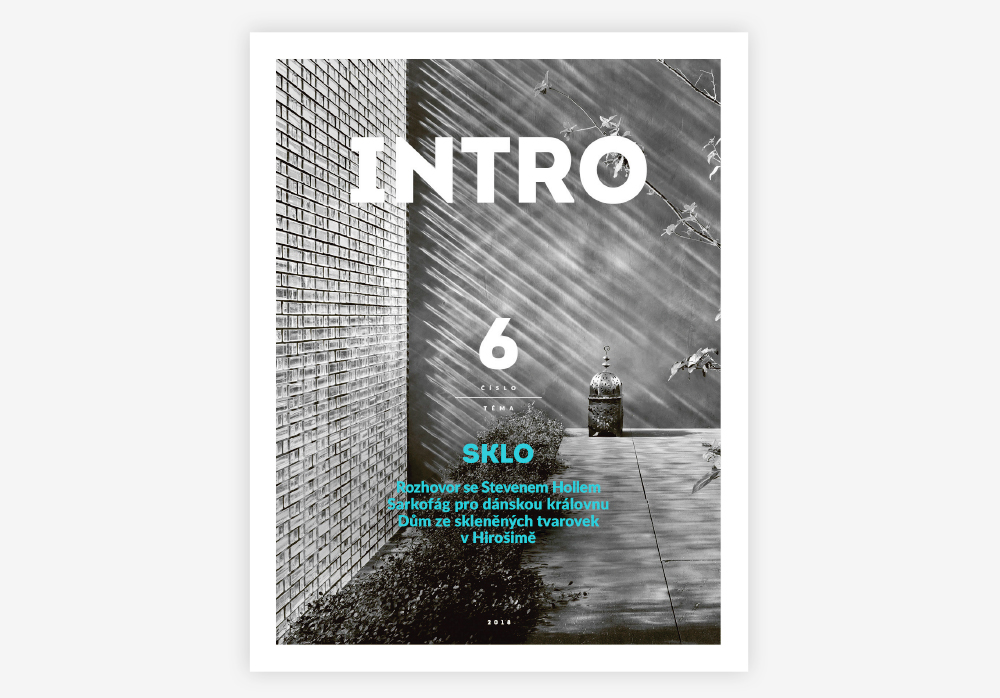 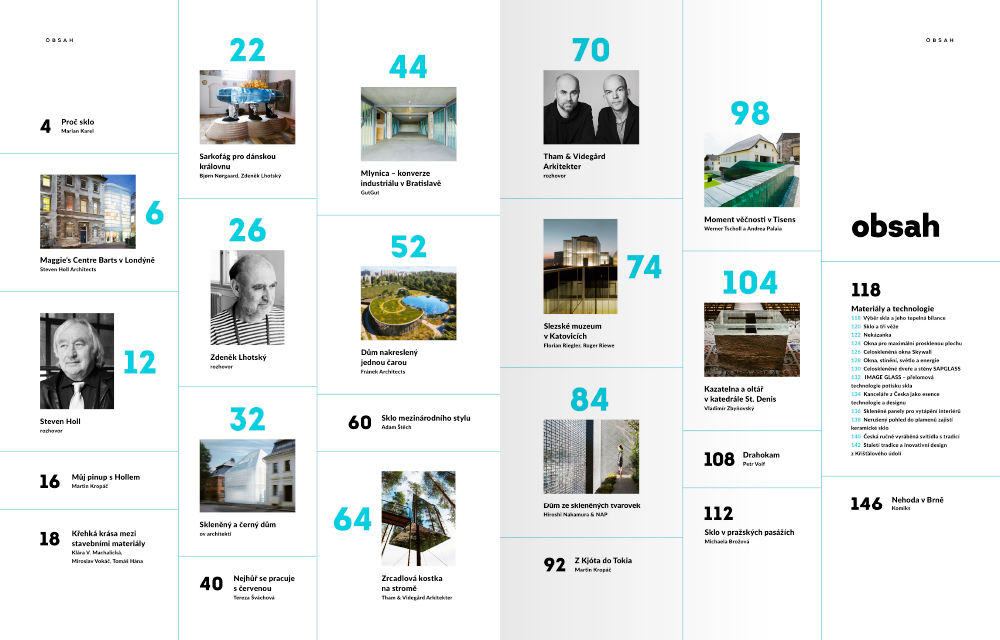 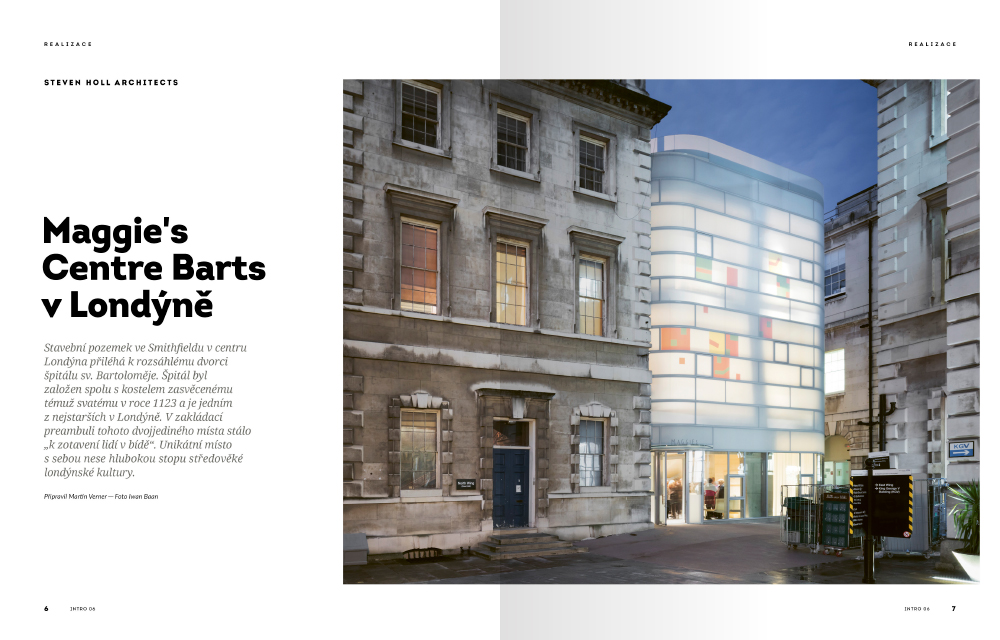 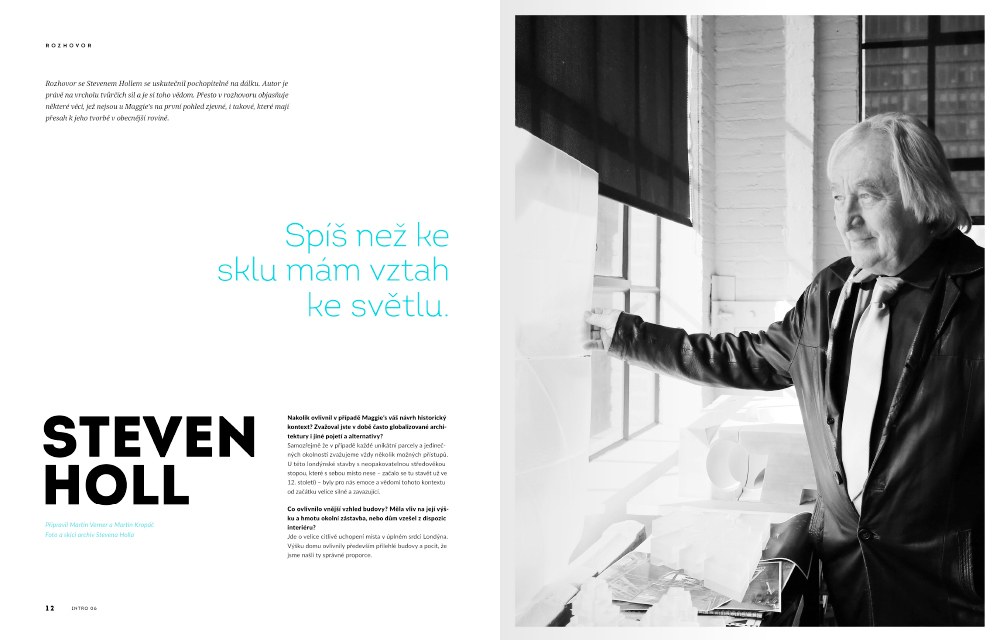 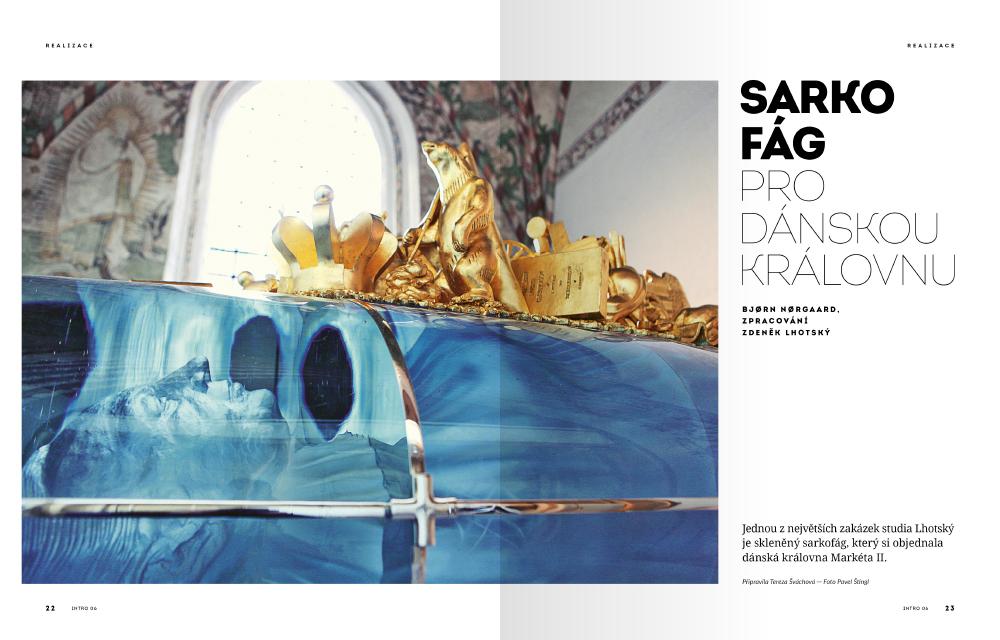 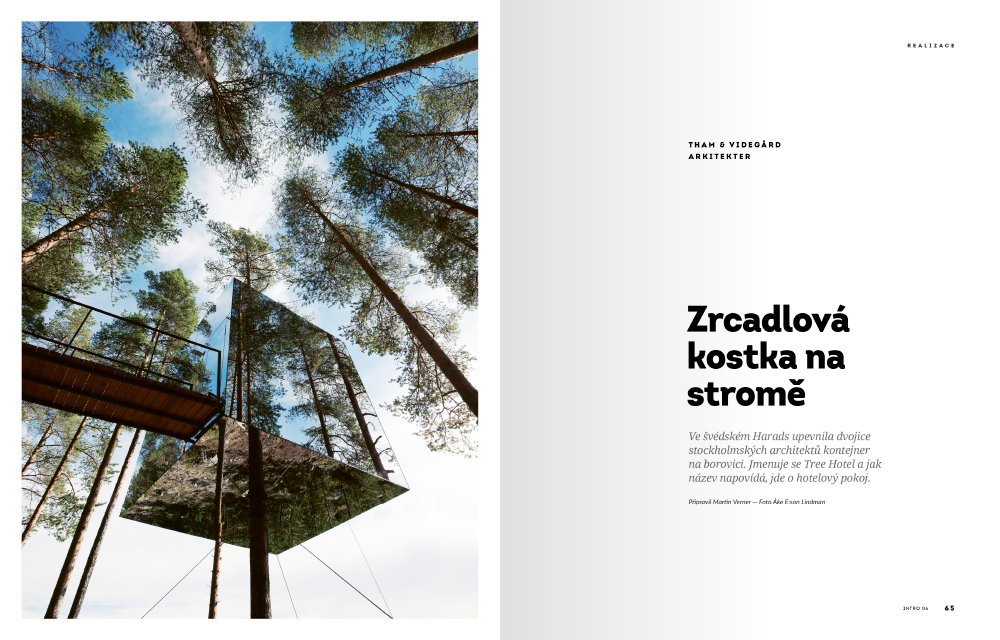 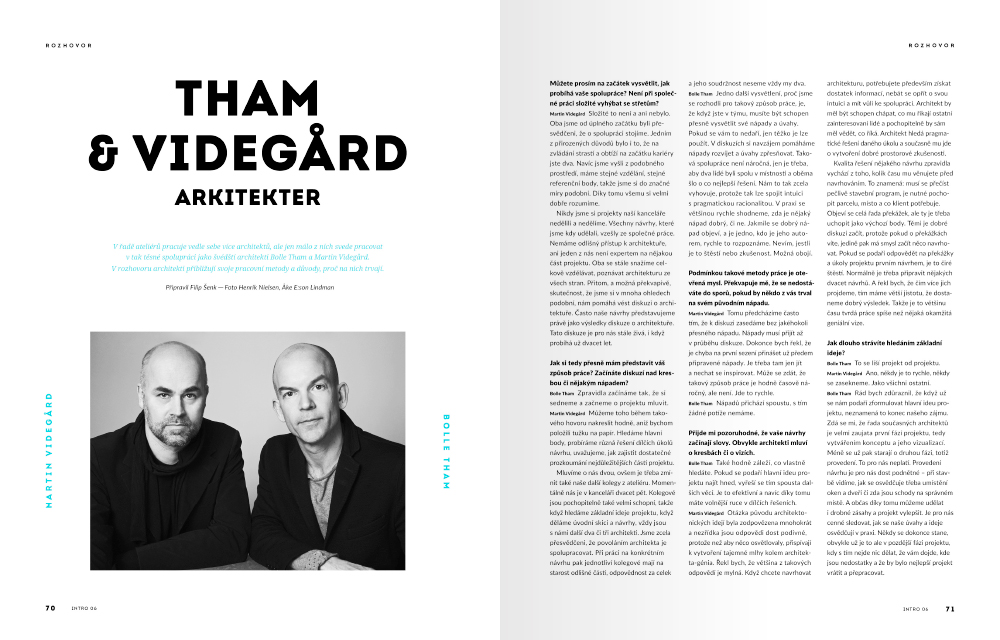 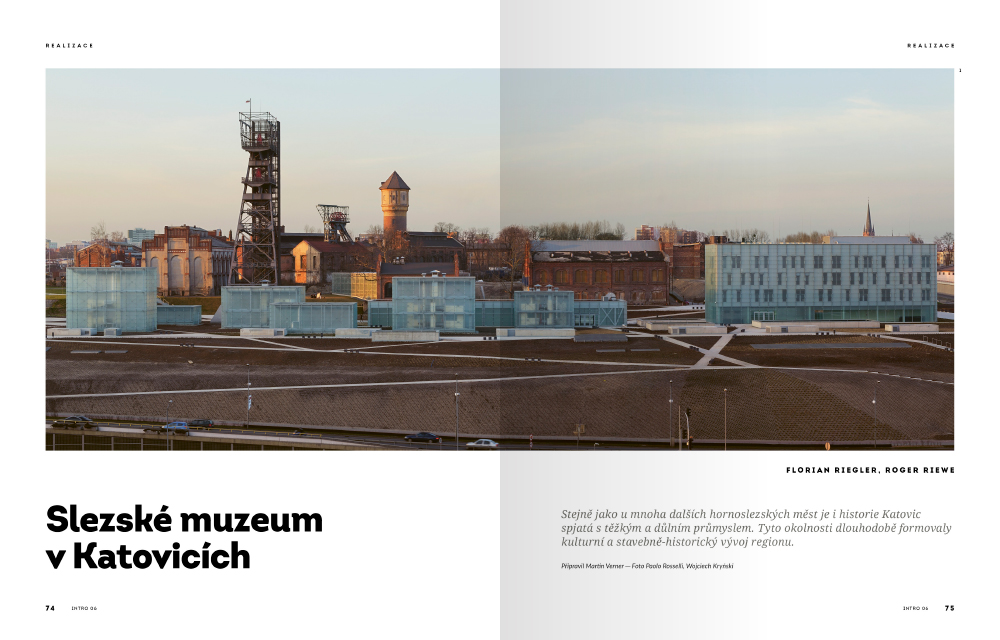 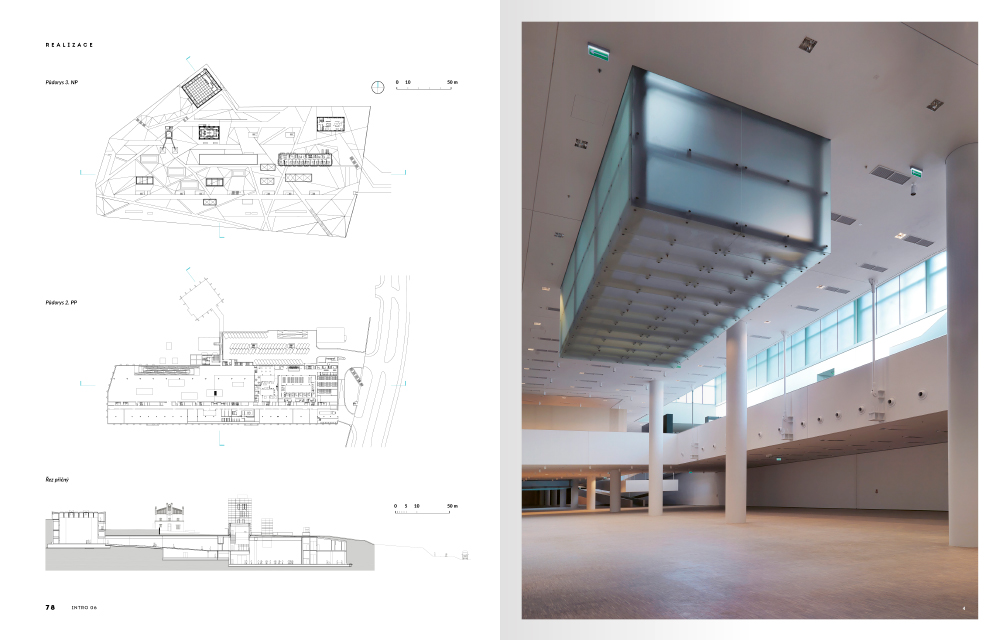 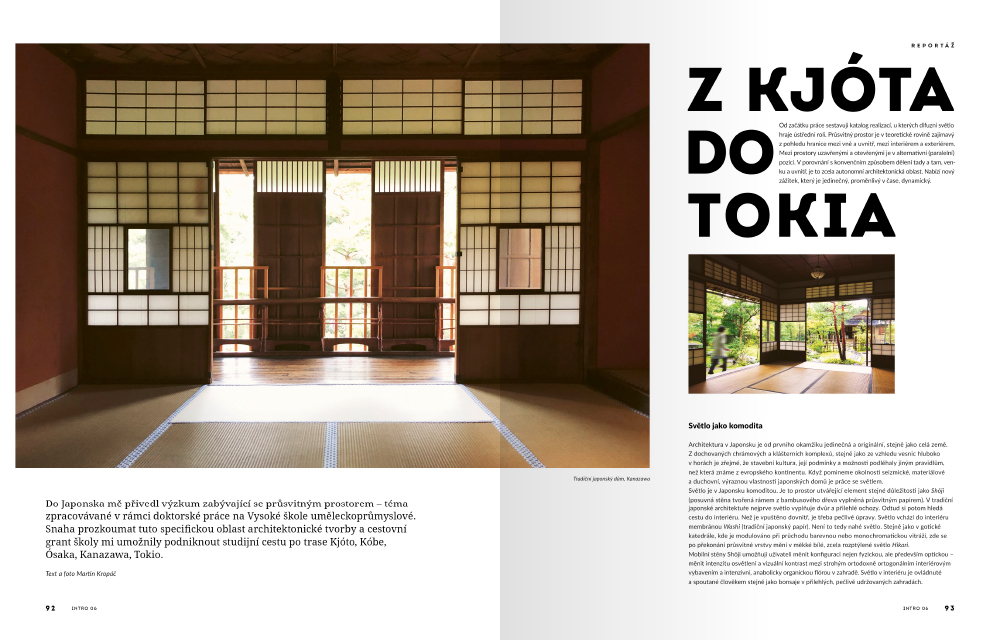 Working with glass is really about the shaping of light. Buildings constructed with this material change in appearance as the environment around them transforms. The sixth issue of INTRO shines a light on glass, taking in a wide spectrum of projects that are decidedly worthy of attention.

I always have the urge to write something more personal than is expected of an editor's note, which can be a boring genre. So I’ll tell you a little story that unfolded during the preparation of INTRO’s glass issue.

Petr Volf sent me a text about the New Stage at Prague's National Theatre. He didn't have accompanying photos, but suggested I approach Radomíra Sedláková, whose monograph about Karel Prager (the building's architect) had contained nice photos. Radomíra Sedláková in turn referred me to her publisher, Titanic.

Rather worn out by this chain of negotiations, I picked up the comic book Savages (Divoši) by Lucie Lomová and reread a few pages. It’s a story from the turn of the last century, or rather, from its beginning, when traveller Alberto Vojtěch Frič returned from one of his adventurous expeditions to the Amazon with native tribesman Čerwuiš. Then I put down the comic book and googled the contact details for the Titanic publishing house. There on the landing page looking at me was a photo of the tribesman I knew from my childhood. It was a picture from the book of Frič’s journey to South America. Stuck in communist Czechoslovakia, I had devoured any and all travel books and had owned and loved this book as a child. Frič was a hero to me…

The picture on the publisher’s site immediately took me back to the comic book I'd just set down, and for a moment I felt I was back in my childhood and at least partially in the Amazon.

When I returned from my reverie, I called Titanic to see about publishing their historic photo documentation of the New Stage. My call was answered by…Yvonne Fričová. Yes, the publishers are the descendants of Alberto Vojtěch Frič! Did I dream it?

If you find photographs and drawings accompanying Volf’s article in this issue of INTRO, then I guess it really did happen!

22 A Sarcophagus for a Danish Queen

32 Black and Glass Buildings for Lasvit

40 Working with Red is the Worst

52 A Building Drawn in a Single Line

64 Mirrorcube in a Tree

74 The Silesian Museum in Katowice

84 A House of Glass Blocks

92 From Kyoto to Tokyo

98 A Moment of Eternity in Tisens

104 A Pulpit and Altar for the Basilica of St-Denis

146 Comics - An Accident in Brno
This website is using cookies - More detials. By continuing, you agree to use them.
OK